KIRKUS REVIEW: A multifaceted coming-of-age story about a teenage boy’s forays into love, lust, and entrepreneurship. 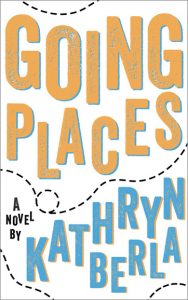 At the start of Berla’s (The House at 758) book, 17-year-old aspiring graphic novelist Hudson Wheeler, facing his senior year in high school, formulates a plan. He writes an email to his mother asking if she can home-school him for his final year. Not only has he lost the company of his two best friends (to a school transfer and a new girlfriend), but he has also decided that traditional education is no longer relevant to him. Hudson wants to spend his life writing graphic novels and traveling the world, and he has already started two businesses: a dog-walking enterprise and a company called “Distress Dial,” which handles non–911 emergencies for seniors. His mom agrees to his proposal with three stipulations: he must attend school to take physical education and art classes; pay rent; and “apply to two (2) colleges for which he has a reasonable chance of being accepted.” Happy with his newfound freedom, Hudson chooses a yoga class to fulfill the physical education requirement, and there he meets a beautiful girl named Alana Love, with whom he becomes smitten. The novel follows Hudson as he attempts to navigate the world of an independent-minded, business-owning student who thinks he is in love. The story tracks Hudson’s relationships with Alana (who is dating the quarterback of the school’s football team), his friends Fritzy and Gus, and several of his Distress Dial clients—particularly Mr. Pirkle, a 90-year-old World War II veteran showing signs of dementia. The book’s varied structure—which includes Hudson’s emails, to-do lists, and prose narrated in first person—often feels more like a journal than a novel, but this ultimately makes for a more intimate and revealing account of the day-to-day life of a teenager. Berla’s lively dialogue also enriches the story’s authenticity, and she peppers it with contemporary buzzwords like “selfie” and “texts” throughout to make characters’ conversations feel truer and more relevant. The charming story is mostly heartwarming and light, with convincing portrayals of teenagers attempting to distinguish between lust and a desire for companionship. But the book also deals with more serious topics like grief, aging, illness, and heartbreak—making it both entertaining and poignant.

BUY NOW FROM YOUR LOCAL BOOKSTORE