Skip to content
berlabooks@gmail.com
Home » Uncategorized » If You Could Turn Back Time (October 20, 2011) 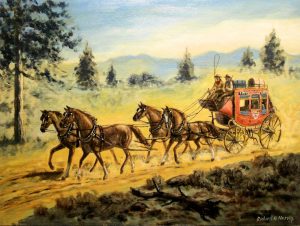 Out of the six of us, the three women chose 1850 and the three men chose the present day.  But the interesting part was that the women didn’t make the choice for the wealth it would bring us, but rather for something unnamable that seemed to be missing in our present day lives.  Something that we thought—or hoped—we could discover in the past.  The men were unwilling to give up the luxury of technology, the advances in medicine, the convenience of modern-day travel and communication.

I’ve always been subject to this golden era thinking—a syndrome I never put a name to until I saw Woody Allen’s “Midnight in Paris”.  It explains my passion for history from a very young age, my desire whenever I travel to a new place to read a book about its past before I even have time to appreciate its present.

In my mind I erase the buildings and houses from the landscape and visualize grizzly bears roaming the hills and stagecoaches traversing the deeply rutted dirt roads where no CalTrans was on the scene to smooth out the journey.

Like David Bowie in “The Man Who Fell to Earth” I fantasize that I can look out the window of my speeding car and see the frontier pioneers looking back at me and wondering what it was that they just saw.

“You’re not made of stern enough stuff,” my husband will say and be correct in saying so because I’m not a terribly resourceful person.

“But I’m just a product of my age,” I remind myself.

I am pragmatic enough to realize that, just like Owen Wilson’s character discovers in “Midnight in Paris”, the grass always looks greener from the other side.  But it doesn’t stop my dreaming—almost longing— and makes me wonder about the possibility of reincarnation.  I also realize that I’m in danger of missing the moment playing out right in front of me that some future generation will look back upon in wonder.

Then what is it that makes us golden age thinkers yearn for some past era?  In my case there are two eras that I feel strongly connected to…both of them times of major upheaval.

There is, of course, the desire for lost innocence that I naively imagine to have existed even as I know that there was never an age of innocence.

There’s a matter of surprise which seems to be lacking in the present day.  Everything is known.  The world has been examined and reexamined.  The frontiers now lie in outer space.  The surprises that do come are so technically oriented that they lie beyond my comprehension.

And then there’s the matter of living in the collective consciousness of dramatic and meaningful change.

I lived in such an era as a teenager.  A great societal shift fractured forever the rules as we knew them and, like the Japanese earthquake, seemed to permanently alter the axis of the earth. Even the music of the 1960s has more urgency to many in my children’s generation than the music of their own generation.

Then the 1970s arrived and with it came disco and by the time the 1980s arrived and the wall came down, the world pushed the snooze button.

Only the scientists remained to shake us from our slumber.  They continued to break down walls and change the world while the rest of us observed and applauded.

Every once in a while I come across a book where every sentence creates a sense of awe in me but also makes me despair for the talent that I could never match.  Radcyffe Hall’s “The Well of Loneliness” is such a novel.

A group of women who volunteered as ambulance drivers on the battlefronts of WWI are now faced with the end of the war and a return to normalcy.

“…a mighty event had slipped into the past, had gone from them into the realms of history—something terrible yet splendid, a oneness with life in its titanic struggle against death.  Not a woman of them all but felt vaguely regretful in spite of the infinite blessing of peace, for none could know what the future might hold of trivial days filled with trivial actions.  Great wars will be followed by great discontents– the pruning knife has been laid to the tree, and the urge to grow throbs through its mutilated branches.”